Wood grain Decal "Fine" 1/72
Wood grain decal for recreation wood grain on WWi airplanes Scale: 1:72 can also be used for other wood of like ammunition boxes, furniture, trucks for the sample airplane both types of decals were used
€15.50*
Details 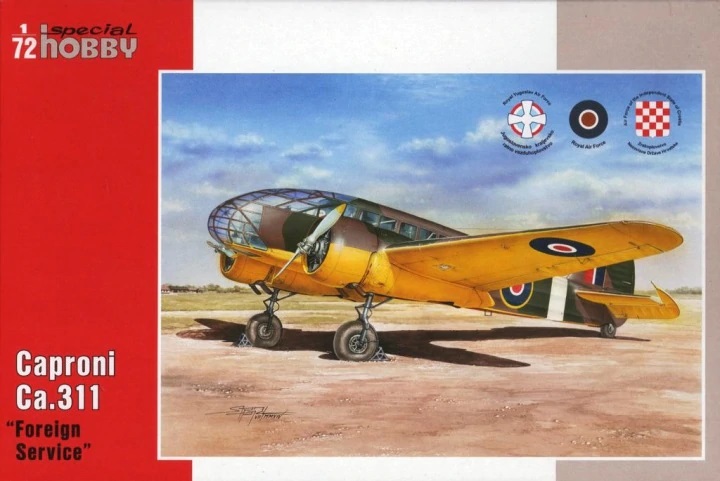 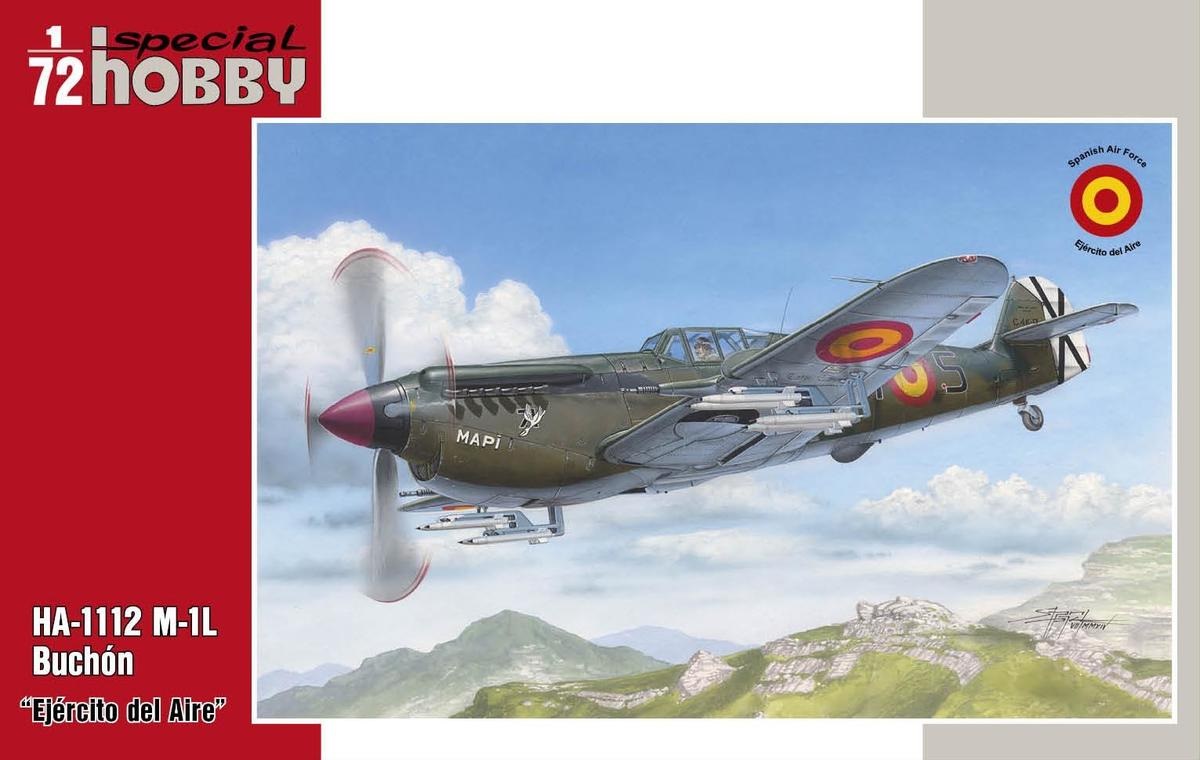 HA-1112M-1L Buchon Ejercito del Aire
injection-plastik model kit w/ resin- and etched partsscale 1:72unassembled/unpaintedHA-1112 M-1L Buchón “Ejército del Aire”Although Spanish dictator Franco owed to the Italian fascists and German Nazis for the successful coup, he did not let them to pull him into World War 2. This fact did not prevent him, however, from purchasing weapons or their production license rights from Hitler’s Germany. The license for the Bf 109F/G fighter was purchased in this manner. The airframe production was trouble free in Spain but the engines should have been delivered by Germany. Eventually this never happened so the Spanish have to help themselves. Initially, they tested domestic HS-12Z engine but it was no earlier than in 1949 that a small series of HA-1109 K-1L/C-4J was produced. Meanwhile the airframes had been awaiting the power plant installation already since 1944! In 1953, Great Britain lifted the embargo so it was possible to purchase British Merlin 500/45 engines. Eventually, these engines were installed into modified Messerschmitt airframes. Between 1955-56, the Spanish Air Force received 171 machines of the new HA-1112 M-1L/C-4K Buchón (Pigeon) version. Of course these aircraft could not have been used as fighters, their primary role were the ground attacks. For these missions the aircraft were equipped not only with cannon armament but also with rockets. The latter were used against the insurgents in Spanish Morocco in 1958-60. During the mid 1960s the Buchóns were transferred to training and reserve units. But their finest hour was yet to come. About 15 Buchóns together with Spanish license-built He 111 (CASA 2.111) were used for the filming purposes during the shooting of Battle of Britain film in 1968. To resemble the Bf 109 the film Buchóns were modified by addition of the squared wing tips, mock up weapons and tail plane struts. Of interest might be the fact that during the filming the Buchóns were used not only as German aircraft but also to expand the Hurricane force as they flew in the formation in the background. Several Buchóns survived the filming and participated in other films, too. Some of them still fly nowadays as warbirds.   The kit of the Spanish ground attack version of the Buchón contains two frames with grey styrene parts, a part of which, including the rockets and their racks are injected from a metal mould that was completely designed in 3D CAD, there is also a frame with clear parts, highly detailed resin cast cannon parts, exhaust stacks and photo-etched parts. The Buchóns in Spain served in two camouflage scheme standards. Initially it was the overall blue coat that was later replaced by aluminium dope on the upper surfaces and light blue coat on the lower surfaces. The decal sheet  offers markings for three machines; two of them feature the standard camouflage scheme while the last one carries non standard field applied camouflage. The overall blue and the non-standard machine sport nicknames on their noses and also unit badges
€16.50*
Details 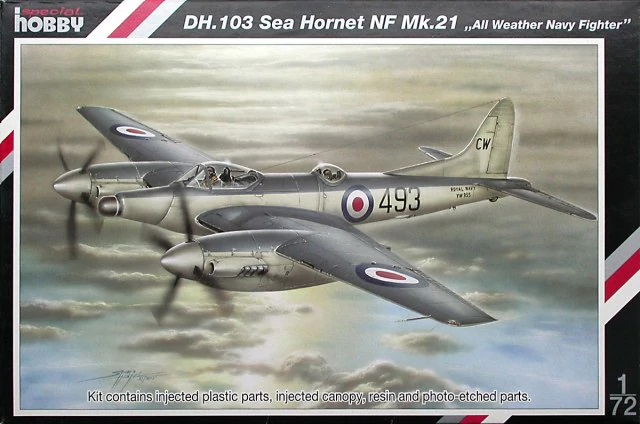 Delta Mk.II/III RCAF
plastic model kitscale 1.72not assembled or painted Delta Mk. II/ III RCAF 1/72Having left Northrop Aircraft Corp. (Stearman-Northrop) controlled by Boeing, Jack K. Northrop along with his partner Donald Douglas established a new company, called Northrop Corp. The company’s premises were based at Inglewood, California. In 1932, Northrop  followed his earlier and successful cargo and mail types the Alfa and Gamma and designed a new one, named the Delta. It was a all-metal, single engined low-wing monoplane with fixed undercarriage covered in spats. The type was intended to be used on short domestic routes and was built in several versions, differing by their powerplant and also the shape of the pilot’s cockpit canopy. The first versions known as the Delta 1A, 1B and 1C featured a narrow canopy housing only one pilot. Following versions, the 1D and 1E already had a wider cockpit enabling a crew of two to sit there and they also had a much massive dorsal section of the fuselage. Unfortunatelly, one of the first Delta 1A machines crashed in Mexico while being delivered to a customer. This accident was also one of the reasons for the US government to ban the usage of single engined types for regular passenger transport. Aircraft already produced were bought by private subjects or used by companies for business trip purposes.  One of the Delta 1Ds, with construction number 74, was used by the US Coast Guard and later it was handed over to the US Corps of Engineers and flown in African Ethiopia during the Second World War. Delta 1D c/n42 first saw service with Ellsworth’s Antarctica Flight, then was bought by the Australian government and following the outbreak of WW2 it was transferred to the RAAF. Some other Deltas were lucky to have seen war service even earlier as three of them had been acquired by the Spanish government, though two of them fell into the hands of Spanish Nationalist Forces making the Delta the type to fight or be used on both sides of the conflict. In 1936, Canada bought licence rights, thus partially making up for Northrop’s  business failure with the type. The Canadian machines were produced by Vickers company in versions Mk.I to Mk.III. While the Mk.I and Mk.II versions differed from their American predecessors only in details, the Mk.III featured a completely redesigned tail unit. Canadian Deltas saw service in a multitude of roles, they were used as photographic machines and for aerial survey, following the outbreak of WW2 they began also flying reconnaissance missions, anti-submarine patrols and were also used for training purposes. Many of them were also fitted with a pair of floats or skis.   Our kit brings the option to build one of two Delta Mk.II aeroplanes or one in the Mk.III version which sported a new tail fin. All of these three machines flew in natural metal overall, one was used during 1937, the two others were seen in service in the WW2 era. The model comes on five grey injection moulded styrene sprues accompanied by one with clear parts specific for this Canadian variety of the Delta.
€16.60*
Details 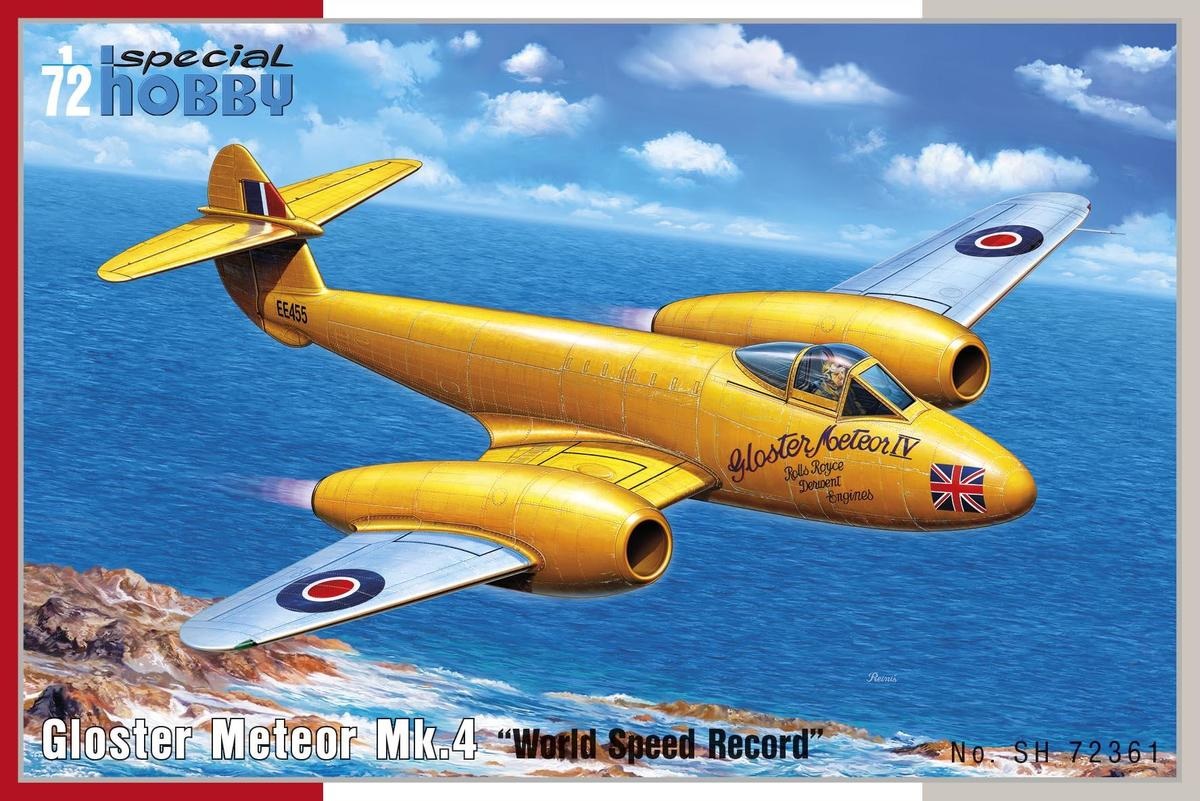 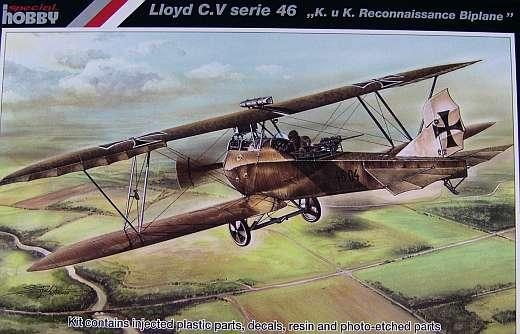 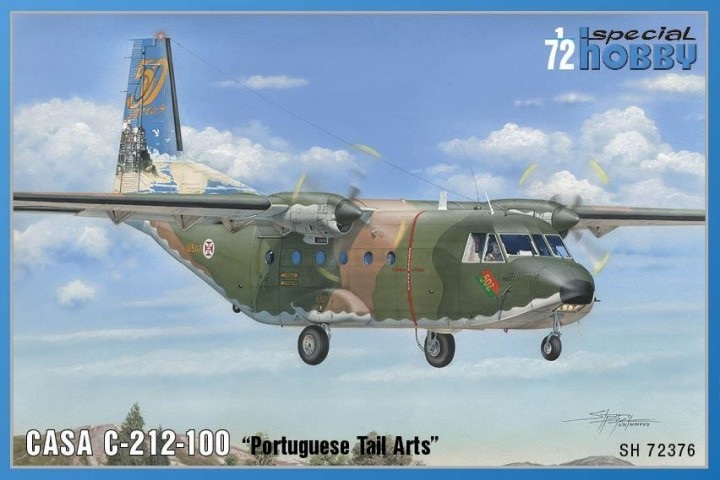 CASA C.212-100 TAIL ART
plastic kitscale 1:72unassembled/unpaintedThe CASA C-212 model comes on as many as five grey styrene sprues and one clear plastic sprue. Limited edition reboxing #SH72376 CASA C-212-100 ‘Tail Art’ offers two highly attractive Portuguese military machines both of which are adorned with extremely elaborated paintings on their tails.The decal sheets (two of them in the box) have been printed by Italian Cartograf. The styrene parts are identical with our #SH72344 model kit.
€32.50*
Details 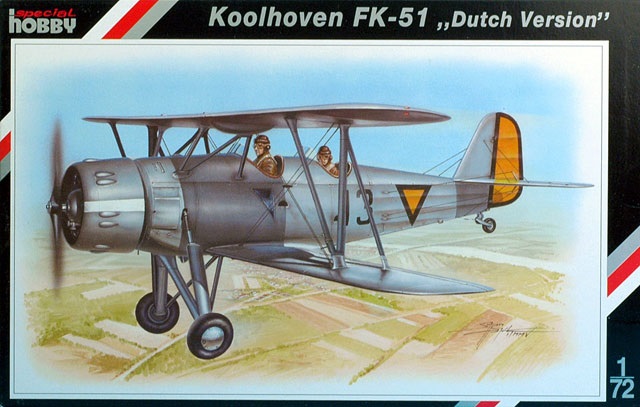 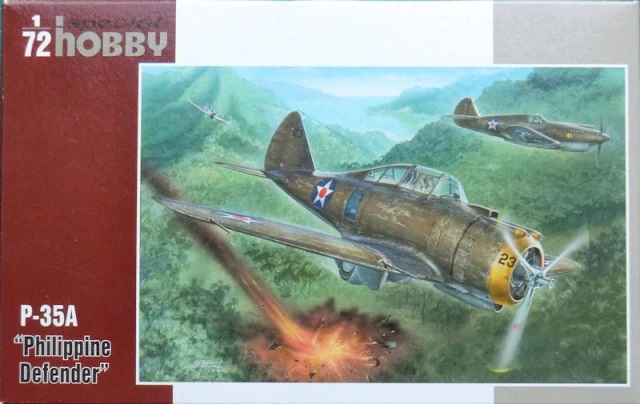 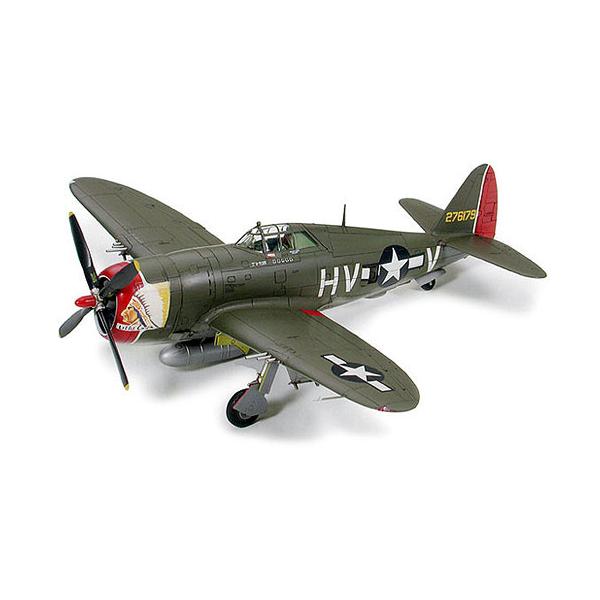 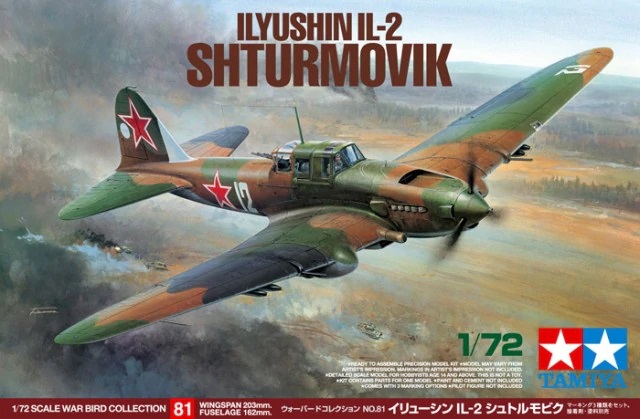 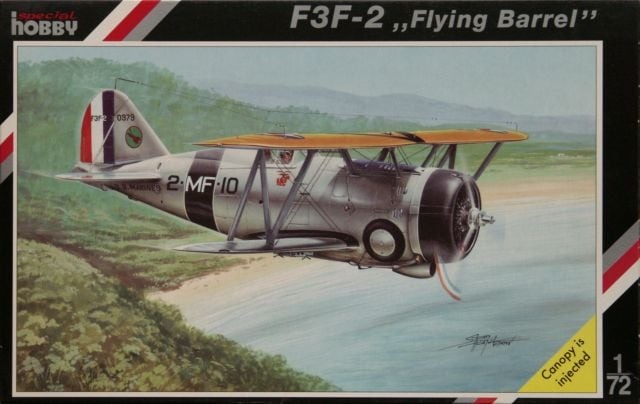 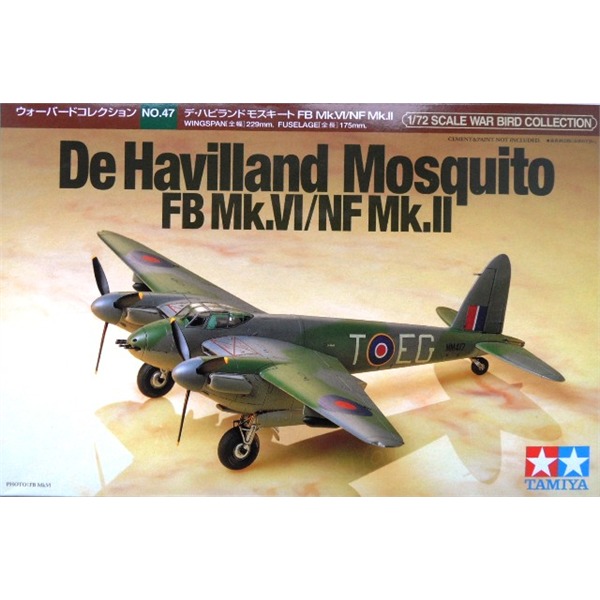 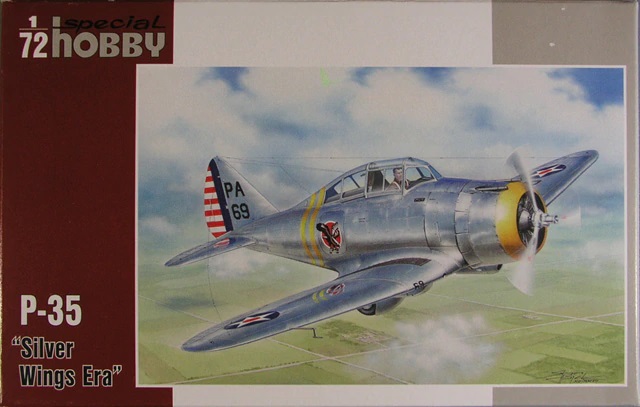 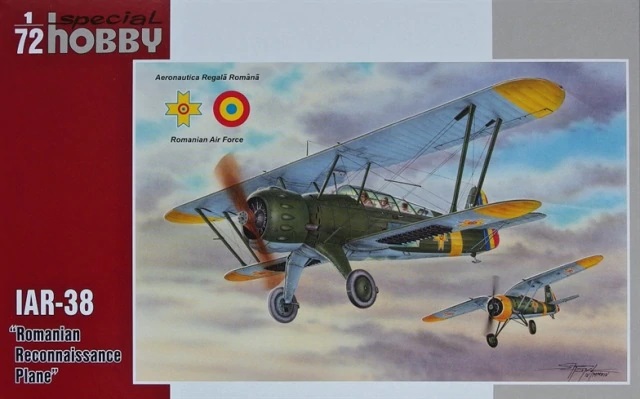 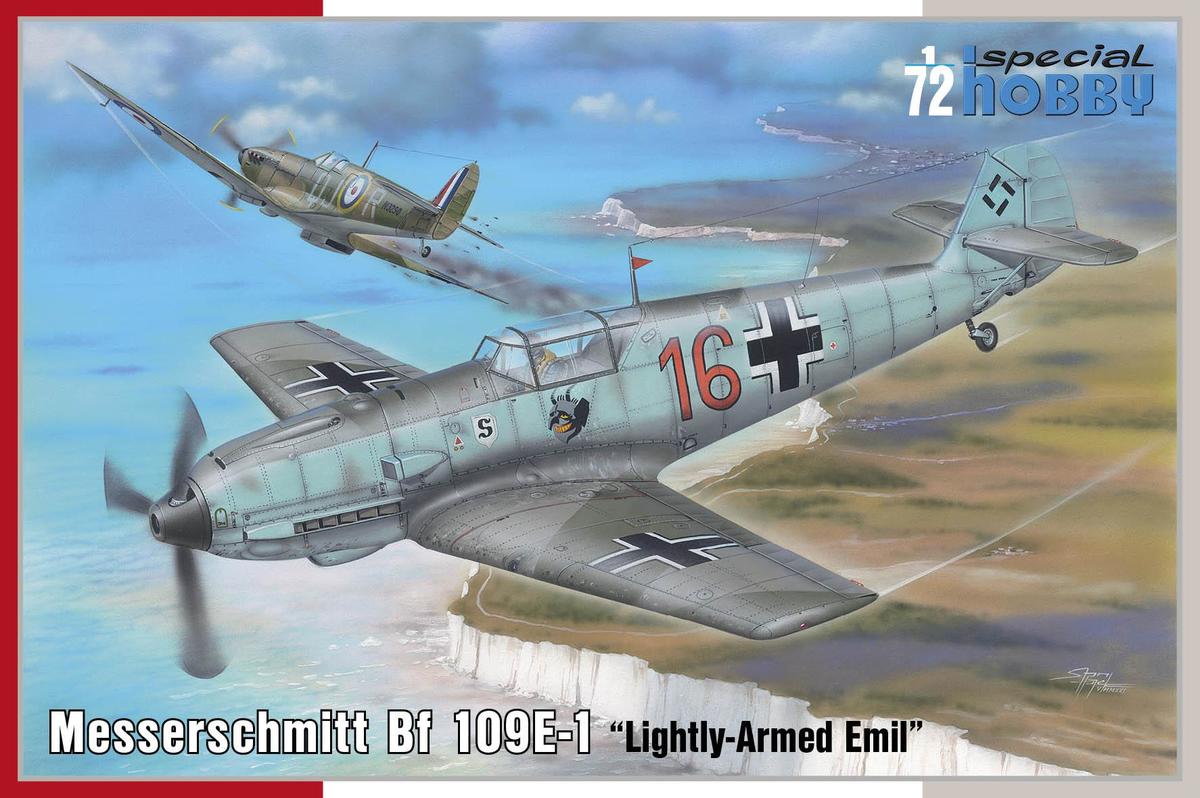 Messerschmitt Bf 109E-1 ‘Lightly-Armed Emil’
In the first two years of World War Two, the Messerschmitt Bf 109E was arguably among the top fighter aeroplanes of the world, if not the very best of them. The type was produced in two major varieties differing by their armament – the so-called lightly-armed type and those with heavier punch. The former was fitted with four machine guns, two of them above the engine, the other two in the wings, the production gave versions E-1, E-5 and E-6.  This kit is a follow up to the E-3 and E-4 versions of Special Hobby Bf 109E kits which have recently been awarded the Model of the Year 2021 prize. It comes on two grey styrene sprues, one clear parts sprue and the decal sheet brings markings for four interesting machines operated by the Luftwaffe. The picked schemes offers machines flown by such ace fighter pilots as were Fritz Losigkeit who spent some time during the war flying in Japan and H.Trautloft, there is also a machine in two shades of green wearing a witch emblem under the cockpit and a machine of JG2 commanding officer Obers Gerd von Massow. superbly detailed model interesting decals, machines of the ace pilots this version has never been on the market before in this quality available separately are the painting masks and CMK resin setsinjection-plastik model kit scale 1:72 unbuilt/ unpainted
€14.70*
Details 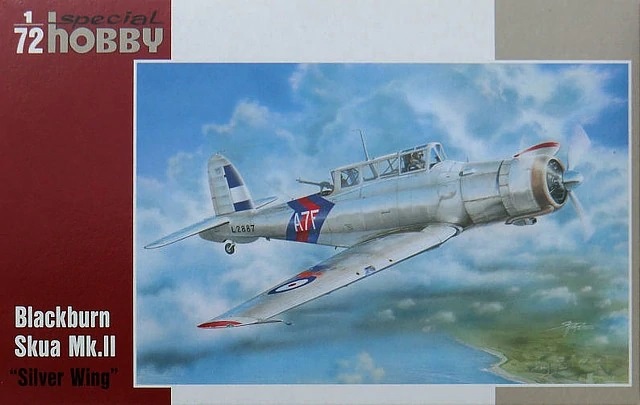 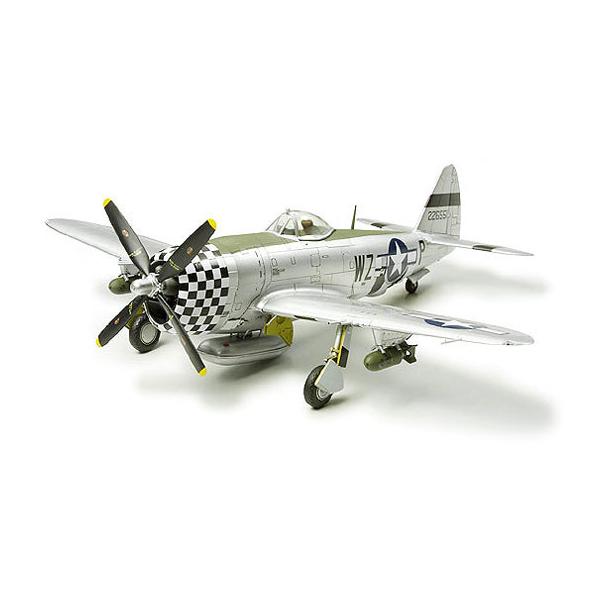 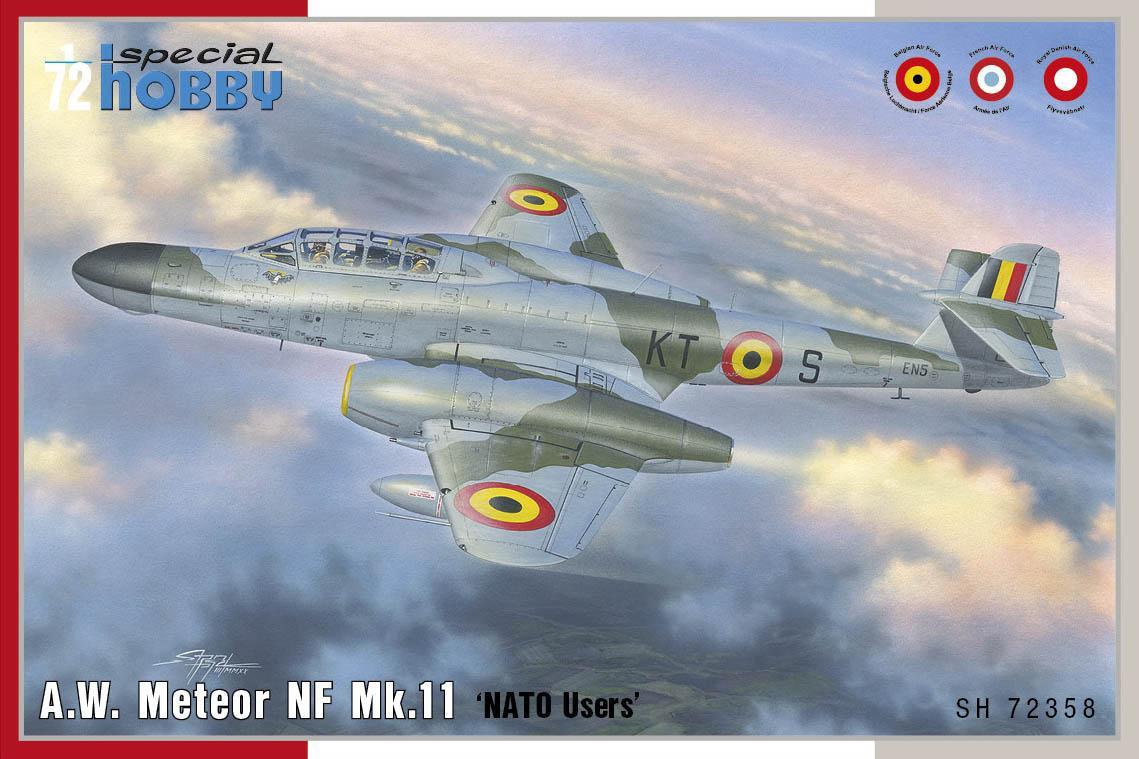 A.W. Meteor NF Mk.11
A.W. Meteor NF Mk.11This British all weather twin jet fighter aeroplane not only served quite a long time with the RAF, it was also exported with considerable success to a number of NATO countries as well as to the Middle East.- four grey styrene sprues, one clear plastic sprue.- decal sheet covering three options come with a full set of airframe stencils- marking options for a Belgian, French and a Danish machinesplastic model kitscale 1.72not assembled or painted
€18.70*
Details
This website uses cookies to ensure the best experience possible. More information...